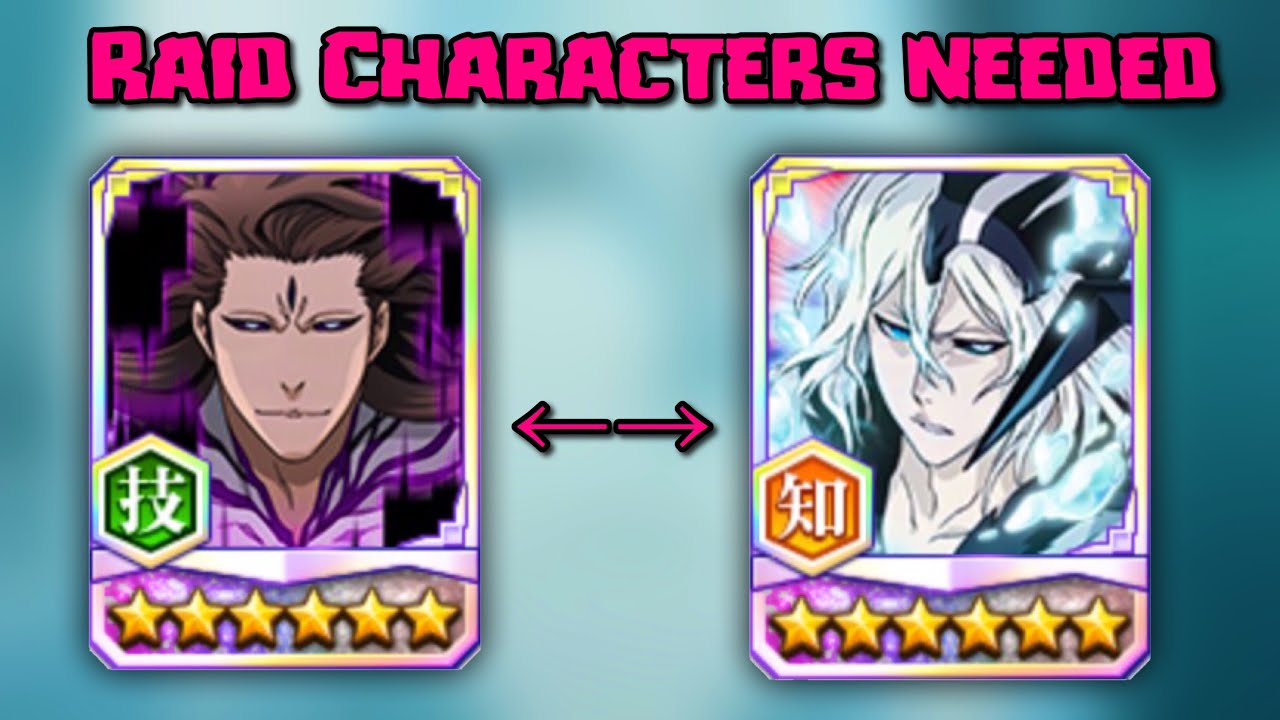 Raids are always a delight to play through in any free-to-play multiplayer game and the raid gameplay in Bleach Brave Souls is no exception. However, the entire purpose of raids is to push players to their limits and encourage teamplay in order to complete the goals and achieve the best-case scenario for the best of rewards – so that means you need the best characters for the task too.

But what’s especially interesting about raids in this game is that you’re not just supposed to take the best character that you can, complete the tasks, and then go home with some loot. Instead, the game has a long list of characters which you actually gain as rewards for completing raids in the game! These characters can be used normally in gameplay and they can also be used as loot to upgrade the normal versions of characters that you have – so it’s pretty useful through and through.

It can take a while looking for the best characters on your own, so we’ve created a thorough list to save your time and help you get started with the best raid characters that you can find in BLEACH Brave Souls. So, let’s get you started!

Here are the Best Raid Characters

Keep in mind that some of the characters stated have a Raid Reward version of lower than 5 stars. Those characters are not included on this list, as we are only discussing their peak which is 5 stars.

Aaroniero Arruruerie is a pretty useful character in general and is one of the better 6 star characters as a whole, with speed as his key attribute and a Soul Reaper as his killer. His set of abilities includes a long list of special moves and due to 1086 stamina and 634 attack points – he’s a pretty decent all-rounder. The icing on the cake remains though, as some of his attacks can inflict weakness towards his enemies and even heals all of the members in the party.

As an upgrade, he can be used for Grimmjow Jeagerjaques and Szayelaporro Grantz for resurrection 6 star skills. While he can also be used to unlock 6 star skills for the conventional CFYOW Aaroniero Arruruerie and Movie 4 Shuren characters.

Jushiro Ukitake is a pretty cool character in general and that carries onto his gameplay too as he has several versions that are all very fun to use in the game. His special move covers a long radius and inflicts fire property towards enemies – which is a pretty useful trait to have. His attack power is at a whopping 740 while his stamina is 1018, which is a combination that you don’t see too often.

As you can tell from the long list of characters he can upgrade, you’re in great luck if you receive the 5 star Jushiro Ukitake.

Rangiku Matsumoto is one of the most common characters in the game as there are over 10 versions of her in existence, and surprisingly enough, not a single one of them is actually upgradeable by the Raid Reward version of Rangiku Matsumoto. However, that does not keep her from being one of the most useful characters that you can get thanks to her special move inflicting paralysis properties to her enemies right after blasting them with a very damaging special move.

Not only that, but she also recovers 20% stamina between quest areas which can be very helpful is used strategically. In resurrection characters, she can unlock 6 star skills for Hueco Mundo Gin Ichimaru, Haineko, Hyorinmaru, Tobiume, Mind Attribute Toshiro Hitsugaya. In conventional 6 star characters she can upgrade Momo Hinamori, Tag Team Shuhei Hisagi, 3rd Fusion Sosuke Aizen, Movie 2 Toshiro Hitsugaya, Redux Toshiro Hitsugaya, Tag Team Toshiro Hitsugaya. As you can see, it’s quite a long list of characters that she can help upgrade which makes up for the fact she cannot improve any of her own kind.

Sajin Komamura is all about speed – but that does not stop him from having a high stamina of 1053 and pretty good damaging points of 638. This is followed by the fact his special deals a high number of damage points which then ends with the infliction of paralysis upon the enemies that are attacked. This allows him to be immensely powerful and also to be able to focus on multiple enemies at once.

On top of being a pretty good character in general, he can help upgrade many characters including himself too. In resurrection versions, we have Technique Attribute Mayuri Kurotsuchi, Heart Attribute Shigekuni Genryusai Yamamoto, Power Attribute Shigekuni Genryusai Yamamoto, and Power Attribute Soi Fon. In the normal 6 stars we have TYBW – VSD Bambietta Basterbine, Speed Attribute Kaname Tosen, Tag Team Sajin Komamura, The Lost Agent Sajin Komamura, and finally, Tetsuzaemon Iba.

The thing about Ulquiorra Shifar’s raid version is that it’s not the most powerful character on the list. Sure, he has pretty decent stamina and attack statistics and the damage done through the special move is pretty high – but it’s not as good as the other characters mentioned above. So, what helps him earn this spot then? While he’s super cool in general, that’s obviously not the reason we’d put him on a list about the best raid characters gameplay-wise.

The real reason is that he contributes to upgrading some of the best characters in the game! He only upgrades ONE resurrection 6 star character and that’s not a problem because this character is one of the coolest ones that you’ll find. That character is none other than the Fully-Hollowfied Version of Ichigo Kurosaki. And in the conventional 6 star upgrades, we still have the non-resurrection version of Fully-Hollowfied Ichigo Kurosaki – which is an amazing plus to have.

As you can tell, this character is a very lucky grab since it can help you upgrade so many cool characters in the game. Let’s be honest, even if the Fully-Hollowfied version of Ichigo Kurosaki wasn’t that high up on the tier list for the game – every fan would want to play as him anyway. And of course, Ulquiorra Shifar’s raid version allows him to upgrade himself too so that’s always great.

And that is the end of our BLEACH Brave Souls best raid characters! Keep in mind that the game receives new characters every now and then, so this list is subjected to change if someone stronger than our top 5 is added later into the game. But for now, this is the ideal list and holds the key to some really powerful upgrades!