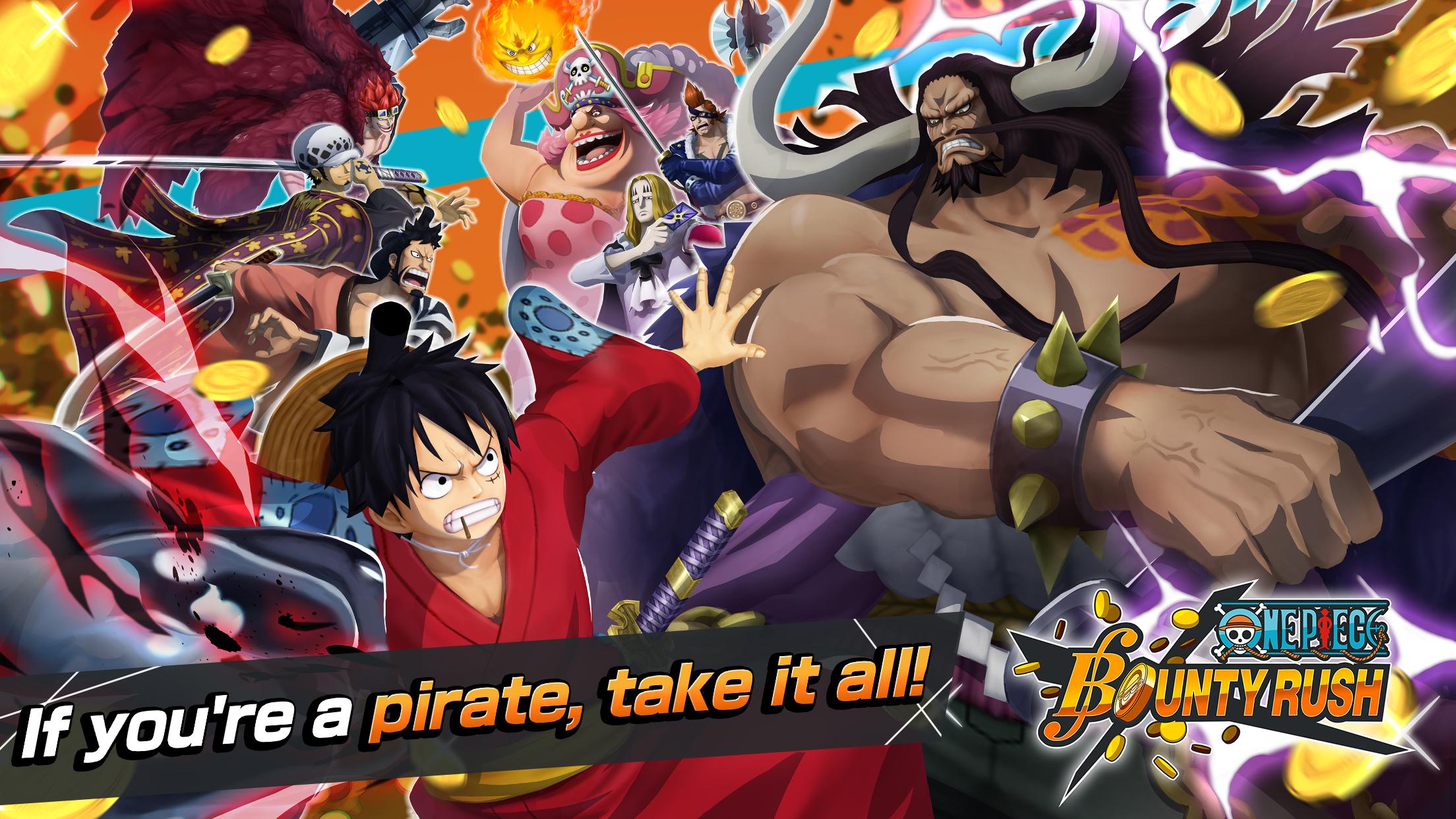 From the series of One Piece, One Piece Bounty Rush is a mobile game released in 2018. Featuring all the original characters of the One piece series, it is a pirate looting battle game.

In this game, you have to make a team of four characters and set out on the map to loot the treasures and consumables. Every team member will play his own specific role in the game so you must make the strongest team of the pirates. You will play as the leader of the team and guide them.

To loot the treasures, you will have to battle against the other pirates and win the battles. These battles will take place in the popular battle arenas of the One piece series. To convey the message that the particular treasure belongs to you, you have to counter all the characters of the enemy and place your flag at the top of the treasure. After winning each battle, the level and skills of your characters will increase gradually. Powerful characters will be unlocked when you make progress in the game.

In the One piece bounty rush game, you can play the pirate leagues.

It is the first 3D mobile game of the One Piece series. You can download/get it from the Google play store and Apple AppStore for free. To play the One piece bounty rush game, the android version of your mobile phone must be 5.1.0 or more.

Modes of One Piece Bounty Rush

If your device is pretty high-performing with a good processor and video card, then you can play the Regular mode efficiently. Go for the Lite mode, if you think that the game is heavy or becoming laggy or slow.

The Lite Mode will help you and adjust the graphics down a notch so you won’t get a problem from all the moving things in the game as the game’s graphics are pretty good and it’s packed with action. To see which settings work best for you, you can also play a little with the Horizontal Camera Sensitivity and Vertical Camera Sensitivity.

You may be interested in: One Piece Bounty Rush: Redeem Codes

In One Piece Bounty Rush, there are three main bonuses to characters that medals can provide.

Tag traits come from matching different medals that share traits, so characters can have mixed bonuses.

Stat traits come from upgrading your medals results in increasing the overall stats of your character.

There are 3 different characteristics of medals,

The base effect is just the main ability of the medal, each medal has a different ability but they’re mostly according to the situation.

Traits are simply stats bonuses that you can get by upgrading the medals. They usually affect stats like Attack/Defence/HP but sometimes can affect resistance like tremor resist/stun resist, etc. as well. You can also pass the traits between medals of the same character by sacrificing one of the two medals, the trait that gets passed will be chosen randomly.

Tags are extra effects that you can get by matching medals with the same tags (medal combinations), for example, Luffy and Arlong both have the “Captain” tag and that tag gives you an overall capture speed bonus.

You may be interested in: One Piece Bounty Rush: Beginner Guide

You have to upgrade your medal 3 times until you get one with a 3-star trait with a stat effect you want just like Kuroobi with an 11/12% attack.

You have to upgrade more of the same Medal in attempts to get another 11/12% attack trait in either the second or third slot of your character.

To get the most out of it, you can transfer the trait over to the original medal or the original over to the new one, mainly depending on the medal which has the higher stat. If failed once, you can use gems to have additional chances.