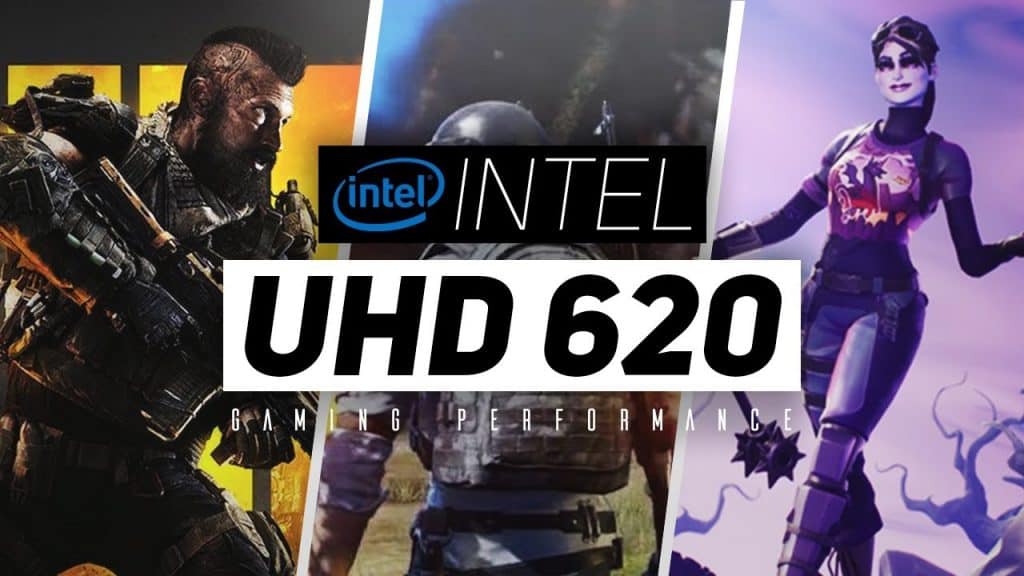 The world is getting developed and advanced by each passing day. There is no bound to the technology that is growing at full speed. We cannot imagine the world without technology and its countless inventions. One of the best products of technology is gaming.

Gaming has emerged as a separate discipline over the past few years. It has become a professional field and a large population of people in the world has been indulged in gaming. Running a high-end game has always been a challenge for a casual low-end system. For this, we can see a wide variety of the latest GPUs to provide support. Intel UHD Graphics 620 is one of them. First, let’s see what Integrated Graphics Processors (GPU) are? And why are they used?

Why are Integrated Graphics Processors Used?

Most games require special processing units to handle them. The CPU is not capable of handling all the heavy graphic elements of a game by itself. This is where GPU is used. GPU, mainly known as the Graphics Processing Unit is a chip attached to the motherboard that mainly provides extra processing power to the system to handle games and other applications. Without GPU, a CPU will not be capable to provide enough processing to run heavy games and other applications. This is the reason GPUs are used.

You may be interested in: How many GB is intel UHD graphics 620

The Intel UHD Graphics 620 is an integrated graphics unit that can be widely found in 8th generation core processors. It is the updated version of Intel HD Graphics 620 that was offered with the 7th generation processors. As compared to its previous version, Intel UHD Graphics 620 has many updated features. We’ll be going through in-depth detail of all its specs, features and also finding answers to some widely asked questions like what games can Intel UHD 620 run, and some others. First, let’s have a look at its specs.

What components do Intel UHD 620 consists of? Here is an in-depth analysis of Intel UHD Graphics 620 specs and features.

Firstly about the version, as mentioned earlier, it is offered with the 8th generation of processors with an addition of some new features. It has a maximum graphics memory of 32 Gb with a processing power of 422.5 GFLOPS. Including this, it has a base frequency of 300MHz with a maximum GPU frequency of 1.15 GHz that is twice as that of its previous version HD Graphics 620. It has a 14 nm FinFET fabrication technique with Thermal Design Power (TDP) of 15 W. Intel UHD Graphics 620 also supports 4K video quality at 60 Hz refresh rate with a maximum resolution of 4096 x 2304. As an improvement, it supports H.265/HEVC Main 10 Profile.

You may be interested in: How to adjust Intel Graphics Settings

As far as the performance is concerned, Intel UHD Graphics 620 is faster and stronger as compared to its previous versions. This is due to the updates and the latest features they have introduced in it. There are many factors on which GPU performance depends. These factors include the maximum clock rate, type of memory, cache size, and some external factors like processing power and RAM. By analyzing these factors in Intel UHD 620 it can be seen that it matches Nvidia GeForce 920M in performance factor. Therefore, it will offer smooth gameplay with games like Counter-Strike: Global Offence, Call of Duty 4: MW and others like these. But despite all the similarities, we have seen that Intel UHD 620 faces slight difficulties in running heavy games like GTA 5 and Battlefield 1 while GeForce 920M gives a positive result. This is because GeForce 920M is made for gaming while Intel UHD 620 is made without keeping any specific purpose in mind. This is why they both differ in performance. Now let’s see what games can Intel UHD 620 run?

We have done some detailed research on Intel UHD 620’s performance and how it behaves with different games. For this, we have gathered a list of some top games. Let’s have a look at it.

What games can Intel UHD 620 run? If we make a list CS: GO would definitely be in it. CS: GO works well with Intel UHD Graphics 620. We have seen that with a decent 8th generation system and 8 Gb RAM, UHD 620 can give a suitable 80-100 FPS. This number changed to 60 when we used HD 620, its previous version. All this data is taken on a suitable resolution of 1366 x 768. Similarly, you can get a better number of FPS if you lower the graphics and decrease the game resolution.

Far Cry 3 is one of the hot favourites of a large number of gamers. Intel UHD 620 provides an average 40 FPS with Far Cry 3 on 1280 x 720 screen resolution. The game works smoothly without any problem so we can take it as sufficient. If you are a casual gamer than Intel UHD 620 is the best option for you. But if you are a hardcore gamer that spends most of his time while gaming then, the answer is the opposite.

In the case of FIFA 18, we will say that Intel UHD 620 barely matches the expectations. It has been seen that Intel UHD 620 cannot give a crispy performance with FIFA 18. It gives a maximum of 25 FPS on 1080p that can be increased to 35 FPS on 720p. So, if you’re a hardcore gamer, then you should not prefer it.

What games can Intel UHD 620 run? Well, we can’t include GTA 5 in this list. Intel UHD 620 provides an average of 40 FPS with GTA 5 that is better as compared to its previous version. But still the same thing again. 40 FPS on GTA 5 is highly suitable and sufficient for entertaining and smooth gameplay. But if you want it to be extra smooth and crispy then you should go for dedicated graphics cards.

With this detail, we can easily answer the question, what games can Intel UHD 620 run? Intel UHD Graphics 620 can smoothly run many games but still, there are some games like Rise of the Tomb Raider, FIFA 19, The Witcher 3 and some more that Intel UHD 620 fails to handle. Although we can make them run on low resolution and graphics settings, this will take away the thrill.

FIFA 21 is in the spotlight these days and it has been making people crazy since its release. With a pack of new features and realistic graphics, FIFA 21 is certainly on the top grounds. So, how does it perform with Intel UHD Graphics 620? Is it ok to spend money on it? Well, your graphics card has got you covered with this one. The tests and analysis have shown that FIFA 21 works quite well with the Intel UHD Graphics 620.

Coming to the details, if you have a normal pc with recommended specifications, then your UHD 620 can offer FIFA 21 with smooth gameplay on 60-80 FPS including replays, on 25-30 FPS. Although the graphics quality is low here, this value of FPS, you will certainly enjoy your gameplay. Let’s jump to medium graphics. Here, the UHD 620 offers 50-60 FPS in gameplay and 20-30 FPS in replays. Now for those, who cannot compromise graphics quality, at high graphics, the 620 offers 25-40 FPS in gameplay and 10-30 FPS in replays. This will ruin the fun but the game will be playable.

This is a very satisfying result and shows that the Intel UHD Graphics 620 can handle FIFA 21 quite well.

Fighting and killing things that are already dead, that’s what Resident Evil 2 is all about. Since its release, it has been making a buzz in the gaming world over its superb gameplay and detailing. Like all other parts of Resident Evil, this one also something else. Now the main thing here is that whether a normal pc with Intel UHD Graphics 620 runs it well. This is the main question here. So, let’s jump into it and see.

Continuous testing and analysis have shown that UHD 620 handles Resident Evil 2 quite well. You can get smooth gameplay with good FPS values on your systems. However, things are not that good here. The UHD 620 can run Resident Evil 2 at a constant 30 FPS, which is not a bad value. But it is only possible on the lowest graphics settings. The game works pretty well, but we recommend not choosing this option. Since Resident Evil 2 mostly contains night scenes, it becomes quite difficult to see with the lowest graphics. This ruins the gameplay. If you turn to medium graphics, the graphics quality gets well, but the FPS starts dropping between 15-20. This is the best possible combination you can get with these two. In the case of high graphics, things get worst. The graphics quality getter better but at the same time, the FPS drops to a mere 5-7. So, you better not think about Resident Evil 2 on high graphics with Intel UHD 620.

Coming to the game, that took the gaming market by a burst. Battlefield 5 remained the core of attention even months after its release. Coping up with intense situations, severe gunfights, and making your way into the enemy territory, is what sums up Battlefield 5. But is it capable to run on a standard pc with normal specs? Well, it depends on the pc, not the game. So, can Intel UHD 620 handle Battlefield 5? The answer is easily a “Yes”.

Coming to the sports genre, Cricket 19 has ruled the gaming universe after FIFA 20 with an ocean of fans and supporters. It has been praised by gamers all over the world. It was the first game in its category with high-definition graphics and realistic gameplay. This is what became a reason for its fame over the past years.

When tested with Intel UHD Graphics 620, Cricket 19 works well and offers smooth gameplay with an average of 32 FPS on medium graphics and 70% resolution scaling. Going through all options, after lowering the graphics, UHD 620 offers a maximum of 45-50 FPS which is more than enough. But in exchange, the graphics quality is compromised. Well, who needs low graphics, when you can get some crispy gameplay at medium graphics. Checking the high graphics as well, the game becomes super realistic with a beautifully detailed grass trough. But, the FPS drops to 20 which takes away the fun.

Overall, the Intel UHD Graphics 620 is the perfect graphics card to run Cricket 19 on your pc.

Cyberpunk 2077 is truly a masterpiece with its superb graphics and extensive detailing. If you are planning to run it on a medium-range system with Intel UHD Graphics 620, then there might be some complications here.

After thorough testing, it has been seen that the UHD Graphics 620 offers an average of 10 FPS on low graphics in the case of Cyberpunk 2077. 10 FPS can make the game work in some way but at the same time, it will change your opinions about the game. Well, it’s better not to take your chances with Cyberpunk 2077 but the main objective here is to test the capabilities of our Intel UHD Graphics 620 which are clear. So, overall if you are desperate to play Cyberpunk 2077 on your mid-level system then you can go with it. Otherwise, we recommend not to go down this road.

In the end, we can get the answer to our questions. So, what games can Intel UHD 620 run? After looking at the details mentioned above, we can conclude that Intel UHD Graphics 620 is quite well capable to handle the heaviest of games even in 2021. It is a perfect choice for a mid-level pc user who wants thrill and enjoyment from his games. Other than this, for people who cannot compromise on speed as well as the graphics, it is not a good choice. There are mainly two options, speed or quality. For those who want to have both, this is not the thing for you.